The below HDR image was produced with Photomatix Pro 4.0.2 from three original JPEG pictures taken with bracketing exposures at +2, 0, -2. The final image was from iPhoto 8 version 7.1.5.378. 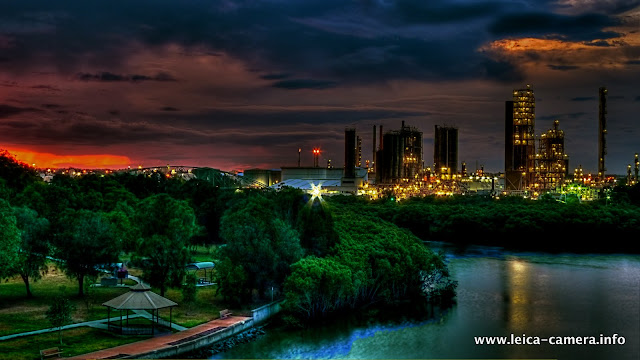 Clyde Refinery, Shell Refining Australia at Camellia, Sydney, NSW
Leica D-LUX4, F/6.3, 8-1.3 sec, 12.8 mm, ISO 80, Pattern Mode, HDR, 16:9, 20:09 19 February 2011
Image level adjusted.
The Oil refinery, Clyde Refinery, is located at Camellia, Sydney. The site is described as a delta area where Parramatta River meets Duck River with a bridge at the east side that extends Silverwater Road from Silverwater north to Rydalmere. The pictures were shot at the middle of the bridge. The Refinery site has a road frontage to the nearby streets and is bounded to the north-east and south-east by the Parramatta River and Duck River respectively, and with plenty of lush, green trees surrounding the delta. The park in foreground in the image is Silverwater Park which is located against the site across Duck River.

As per an environmental assessment report found from a NSW governmental site, Clyde Refinery is the longest operating oil refinery in Australia. Due to substantial investment over the years, the Refinery is among the most complex of the seven refineries currently operating in the country. In 1908 the entire site was owned by the Commonwealth Oil Corporation, in 1913 John Fell & Co (a shale oil company) acquired the assets from the former. Shell acquired the site from John Fell & Co. in 1928 and the land use has remained the same to this day. Clyde Refinery supplies approximately 40% of Sydney’s petroleum requirements and about 50% of NSW’s needs. Clyde Refinery directly employs approximately 270 employees and 100 contractors and contributes AUD$60 million into the Sydney economy each year.

However, this was the first time for me to notice such a large chemical factory existing in Sydney area, though the site stands there for a long time and even could be considered as a historic industrial site, and even though I initially thought such a pollution producer normally should not stay so close to large population like great Sydney area.
Posted by bbao at 23:49