As we know, Leica D-LUX 4 is a re-badged version of Panasonic LUMIX DMC-LX3, equipped with a Leica/Panasonic jointly designed lens and several key technologies solely from Panasonic such as MEGA O.I.S. (Optical Image Stabilizer) and Venus Engine IV. The firmware of Leica D-LUX 4 is actually developed by Panasonic too, though it is officially released by Leica Camera AG. Therefore, D-LUX 4 does have a special Panasonic Service Mode with its firmware, like that of DMC-LX3 and all other Panasonic LUMIX cameras.

I found this mode from reading some forum posts in Chinese talking about how to reset the firmware language of Panasonic LUMIX cameras including LX3. They named this special mode "工程模式" in Chinese, literally "Engineering Mode" or "Factory Mode" in English. After googling the related online discussions, I think the correct term should be "Service Mode" in English.

As far as I explored, the Service Mode may allow you to do some kinds of operations which are normally not available in the camera's menu:

(1) Reset the camera to unboxing settings. (Not only to the factory default settings)
(2) Reset the firmware region for supporting more languages, if applicable.
(3) Check camera usage information.
(4) Maintain the system ROM.

Let's see how to enter the D-LUX 4 Service Mode:

1. Turn off the camera.
2. Switch to RECORD mode [].
3. Set the mode dial to [P].
4. Press and hold the ▲/± button (Up arrow, above the central MENU/SET button) and the FOCUS button (on the top, beside the shutter) simultaneously.
5. Turn on the camera while holding the two buttons. 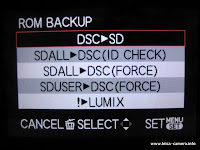 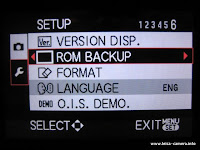 You are now temporarily in the Service Mode. You can confirm your status by checking the SETUP menu. There is one more option named "ROM BACKUP" there, next to the "VERSION DISP." option, as shown at right.

The camera may return from this mode to the normal mode by turning the power off and on again. After the power cycling operation, the extra "ROM BACKUP" option will no longer be available in the SETUP menu.

So what can you do once you are in this temporary Service Mode?

According to the menu options shown under "ROM BACKUP", you may create a backup of system ROM to the SD card ("DSC▶SD"), or restore a version of system ROM and user settings from the SD card ("SDALL▶DSC" and "SDUSER▶DSC"). The "DSC" here should stand for "Digital Still Camera", as a general term used in Panasonic cameras.

Once your press MENU/SET button on the "DSC▶SD" option, the camera will be busy for a few seconds with an animated sandglass showing on the screen. After that, two text files will be generated on your SD card, named "EEPROM00.TXT" (22,587 bytes) and "EEPROM01.TXT" (89,407 bytes). Each file contains a brief header and the hexadecimal dump list of a data block. According to my experience, I don't think they are firmware dump or any kind of executable code, probably just user settings and camera parameters.

There are two options for "SDALL▶DSC" operation, one is "ID CHECK", the other is "FORCE". I did NOT try the two options on my camera. I guess, "ID CHECK" means the camera will verify an ID string or checksum before uploading a code file into the camera. In contrast, the "FORCE" option should just upload a new code file straight away regardless the brand, model and checksum. Probably, someone could use this "FORCE" option to transform a DMC-LX3 to a cute D-LUX 4??

The last option under "ROM BACKUP" menu is "!▶LUMIX". I guess it means "Quit to LUMIX". This LUMIX option can be an evidence to show its Panasonic origin. Moreover, the option was probably named by a UNIX-loving programmer who was used to some old software such as VI for years. I tried this option and it seemed the camera did nothing except blinking the red LED in the front (Self timer indicator/AF focus assist lamp).

Anything else interesting under the Service Mode?

Yes, you may check the usage information of your camera. At first, make sure you are in the Service Mode, then follow the steps below to see the secret of your camera.

1. Press and hold the FOCUS button, then MENU/SET and ◀/⎋ (Left arrow) buttons together. The camera now shows a screen of zeros on a white background. If you press the DISPLAY button, the camera will cycle through three different content showing some kind of parameter codes in decimal or hexadecimal form, as illustrated below. The arrow buttons can be used here to scroll through the code arrays. 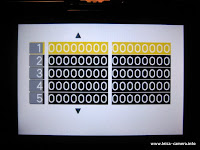 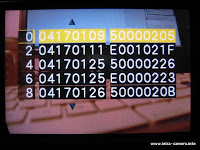 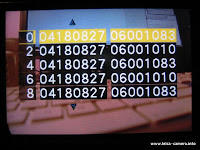 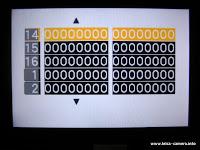 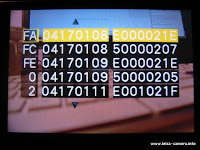 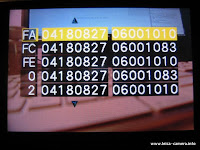 (Guy Parsons, a Sydney based LX3 owner, considered the first "Zero" screen above was an Error Code Log used for Panasonic service persons, and the explanation should be in their Service Manual. He also revealed some of the counters below.)

2. Again, press and hold the FOCUS button, then MENU/SET and ◀/⎋ (Left arrow) buttons together. The camera will show its usage information in two pages, as shown blow. Press the DISPLAY button to switch between the pages, and press the ◀ and ▶ buttons (Left and Right arrows) to scroll the view horizontally. 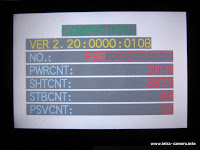 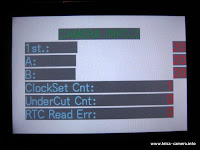 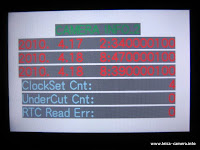 The camera information is interpreted below:

3. Press the same button combination again, the camera will return to the normal display.

As for the operation (1) and (2) mentioned early in the purpose of Service Mode, the camera needs to enter the Service Mode permanently in order to completely reset the camera. 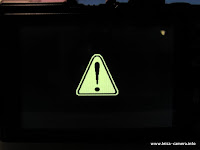 Now you are in the permanent Service Mode. Instead of the red Leica logo, a yellow triangle with an exclamation mark inside will appear when you turn off the camera, as shown at right. According to Wiórek, the yellow triangle appears when the firmware is not set to any of specific regional models.

The camera will NOT return from the permanent Service Mode to the normal mode by turning the power off and on again. You are still in the Service Mode after you turn on the camera. You have to initialise the camera to get the lovely Leica logo back. Please be aware that this procedure will reset all customised settings you made on the camera and erases all photos stored in internal camera memory. You have to proceed through all steps below very carefully, and take your own risk.

Here are the steps to initialise the camera to its unboxing status, and to reset the camera region. This is a Hard Reset compared to the Soft Reset available in the SETUP menu. Make sure the camera is on and in the permanent Service Mode before the initialisation.

1. Switch to RECORD mode [].
2. Press and hold the ▶/⚡ button (Right arrow) and the central MENU/SET button simultaneously.
3. Turn off the camera while holding the two buttons. The INITIAL SETTINGS screen will appear, as illustrated below left. Here, "AUSB" is the region code for Australia. I am not sure why it is ending with "B". 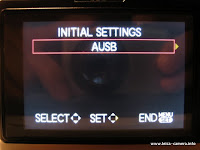 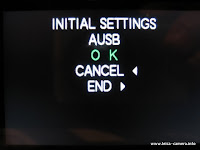 4. Use ▲ and ▼ buttons (Up and Down arrows) to change your preferred region. Press ▶ button (Right arrow) to choose the region code. Press MENU/SET button to cancel. NOTE: In the illustrated screen above left, there is only one region (AUSB) available for my D-LUX 4 as there is no hidden regions for the Australian market. According to some articles (1/2/3/4), the region codes for LUMIX cameras may be NONE (Japan), EG/EGM/EB/GN, GC (Hong Kong), GD (Korea), GK (Mainland China) and PP (North America). 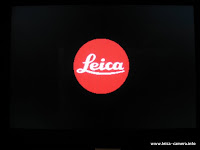 5. At the second INITIAL SETTINGS screen shown above right, press ▶ button (Right arrow) to confirm your choice of region code. Press ◀ button (Left arrow) to re-choose the region. Please be aware that the camera keeps beeping in this step until you press the ◀ or ▶ button (Left or Right arrow). The camera will be off after initialising the settings and showing the lovely Leica logo at the end, as shown at right.

6. Turn on the camera. The following two screens will appear asking you to set the camera clock. Just follow the instruction on the LCD to finish that, as what you did when you first turned on your D-LUX 4. (As I mentioned above, this moment of first clock set will be recorded in the Camera Information, and will not be removed except by a hard reset) 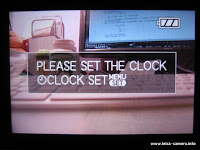 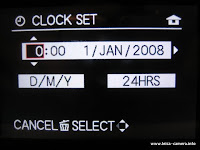 OK, that's what I know about the D-LUX 4 Service Mode, so far.

Please note, all the above procedures should be exactly applicable to Panasonic LUMIX DMC-LX3, too, except not seeing the red dot logo while turning off the camera. :-)) Moreover, I believe that most procedures here will be also applicable to other Panasonic LUMIX cameras and their Leica versions (C-LUX/D-LUX/V-LUX series) as well. In some cases, if there is no FOCUS button on your LUMIX camera, just try other individual buttons (on the top) instead, such as E.ZOOM or DISPLAY button.

According to what I googled as of today, this article should be the most comprehensive guide regarding the LUMIX Service Mode. Just hope it could help.
Posted by bbao at 00:35